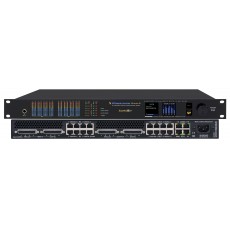 With a single Aura8-IP-3, you can have up to eight processors to use as you wish. Use it as a standalone processor with analogue and digital inputs or make it a part of your WheatNet-IP network. Either way, the Aura8-IP-3 is a powerhouse.

The Aura8-IP-3 occupies a single rack space, but packs an impressive complement of eight fully independent multi-band stereo audio processors. Each is deployable anywhere on the network through WheatNet-IP and offers full AGC, EQ, compression and limiting functions for HD, streaming, podcasting – up to eight separate stereo applications – in one unit.

Each processing chain consists of a 4-band parametric equalizer followed by a crossover and three bands of compression. The compressors each feed their own limiters, whose outputs are then fed to a broadband lookahead limiter for tight peak control. The Aura8-IP-3 has its own local I/O, with four stereo pairs of AES digital audio and four stereo pairs of analogue line level audio in and out, and can function as a standalone processing engine. Because it’s a BLADE-3, it can also instantly configure itself as part of a new or existing WheatNet-IP Intelligent Network, making its processing power available throughout that network.

The Aura8-IP-3 is configured and controlled over Ethernet using a laptop or desktop computer. Included with the unit is Wheatstone’s acclaimed “Audio Processing GURU®” software, which allows easy setup of the processing using familiar, straightforward controls. Also available is a more sophisticated control interface called “GUI Pro,” which provides access to every individual processing parameter for expert-level adjustments.

Processing feeds has never been easier. The synergy in this product of two winning technologies – WheatNet-IP and Wheatstone processing – invites some extremely creative and powerful network designs. As with all BLADE-3s, a routing matrix and routing control interface are included, as well as two 8-channel stereo utility mixers which can be controlled either by WheatNet-IP Navigator software or by the Sideboard control surface, which can be used for a wide range of applications (for example, using Wheatstone’s ACI Automation Control Interface, your automation system can control the mix for satellite or local insertion switching).

It’s also got a built-in web server, so you can configure and control locally or remotely without having to run dedicated software. There’s flexible GPI logic with 12 universal logic ports, programmable as inputs or outputs and routable throughout the entire system, SNMP messaging for alerts, and silence detection on each output that can trigger alarms or make a routing change.