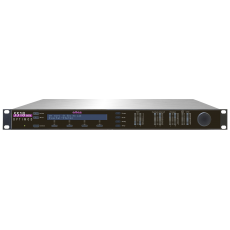 OPTIMOD-FM 5518 is a superb stand-alone stereo encoder combining look-ahead and band-limited clipping techniques with latency as low as 2 ms and full overshoot limiting and extremely tight peak control in both the left/right and composite baseband domains, to control STL-induced overshoots while minimizing artifacts. The 5518 is the ideal choice for network broadcasters who process with an FM audio processor ( Like Orban Optimod FM 8600) at the network origination point and who need a processor at every transmitter to eliminate network STL overshoots.

RDS
The 5518 includes a full-featured RBS/RBDS generator at no additional charge. The generator supports dynamic PS. It can be controlled via the 5518 presets and an ASCII terminal server that can be connected to automation to support, for example, displaying title and artist.

ITU BS 412 multiplex power limiter
The built-in, defeatable ITU BS412 multiplex power controller acts on all outputs to meet even the most stringent European government regulations include a full spectral protection of subcarriers and RDS/RBDS regardless of the amount of composite limiting.

10 Mhz Reference input
A 10 MHz frequency reference input allows the stereo pilot tone frequency to be locked to GPS or another high-accuracy frequency standard. This improves the performance of single-frequency networks in areas where coverage of the transmitters overlaps.

SSB
The stereo encoder’s stereo sub-channel modulator can operate in normal double sideband mode and in an experimental compatible single sideband mode (SSB/VSB) that is offered to enable users to compare and assess the two modes.

Silence Sense
Analogue Fallback to Digital control that allows Silence Sense to switch the active input from Analogue to Digital if silence is detected in the analogue input signal but not on the digital input signal. This function works vice versa as well on both analogue and digital AES input.

Diversity Delay
The 5518 can delay its output by as much as 16 seconds. This delay can be used as the diversity delay in Digital Radio installations.

Remote Control
At the transmitter side you'll be pleased by its three separate remote control ports - GPI contact closures, RS232 serial and built-in Ethernet for TCP/IP networks. The serial and Ethernet ports are supported by the supplied 5518 PC Remote Control application. This Windows® 2000/XP/Vista/7/8 allows you to access all 5518 features and allows you to archive and restore presets, automation lists, and system setups (containing I/O levels, digital word lengths, GPI functional assignments, etc.)

Administrating and Monitoring
The SNMP (Simple Network Management Protocol) features allow you to monitor your Optimod’s status and to send Alarm notifications via your Optimod’s Ethernet connection to your network. API features allow custom third-party applications (including automation systems) to recall presets, view status and set the controls.

The 5518's feature set fully exploits the processor's DSP and computer-based control architecture. To ensure absolute accuracy, you can automatically synchronize the clock to an Internet timeserver. It has a cool-running, energy-efficient switching power supply and uses the latest dual-core DSP chip technology from Freescale Semiconductor.

LCD and full-time LED meters
An LCD and full-time LED meters make setup, adjustment and programming of OPTIMOD-FM easy - you can always see the metering while you are adjusting the processor. Navigation is by dedicated buttons, soft buttons (whose functions are context-sensitive), and a large rotary knob. The LEDs show all metering functions of the processing structure (Two-Band or Five-Band) in use.

Two subcarrier inputs
The 5518 has two subcarrier inputs that are mixed with the output of OPTIMOD-FM's stereo encoder before application to the composite output connectors. One input can be re-jumpered to provide a 19 kHz pilot reference output. Each input has an internal level trim to accommodate subcarrier generators with output levels as low as 220 mV.

Dual-mode composite limiter
A dual-mode composite limiter is available. It can operate in either "Half-Cosine Interpolation" mode or conventional hard clipper mode. The "Half-Cosine" mode provides better separation and preservation of stereo imaging, while the "Hard" mode provides brighter sound because it creates waveforms that are closer to square waves. Both modes provide excellent spectral protection of the pilot tone and subcarrier regions. To ensure accurate peak control, the limiter operates at 512 kHz samplerate.

Inputs and outputs
All normal 5518 inputs and outputs are available, including analogue and digital inputs, two composite outputs with independent level controls and two subcarrier inputs (one of which can be repurposed to emit a 19 kHz pilot reference output for RDS/RBDS generators.

RDS
The 5518 includes a full-featured RBS/RBDS generator at no additional charge. The generator supports dynamic PS. It can be controlled via 5518 presets and an ASCII terminal server that can be connected to automation to support displaying title and artist.

5518 PC Remote software
5518 PC Remote software is a graphical application that runs under Windows 2000, XP, Vista, 7, 8, 8.1 and 10. It communicates with a given 5518 via TCP/IP over modem, direct serial and Ethernet connections. You can configure PC Remote to switch between many 5518s via a convenient organizer that supports giving any 5518 an alias and grouping multiple 5518s into folders. Clicking a 5518's icon causes PC Remote to connect to that 5518 through an Ethernet network, or initiates a Windows Dial-Up or Direct Cable Connection if appropriate.
The PC Remote software allows the user to access all 5518 features (including advanced controls not available from the 5518's front panel), and allows the user to archive and restore presets, automation lists, and system setups (containing I/O levels, digital word lengths, GPI functional assignments, etc.).

Bypass Test Mode
A Bypass Test Mode can be invoked locally, by remote control (from either the 5518's GPI port or the 5518 PC Remote application) or by automation to permit broadcast system test and alignment or "proof of performance" tests.

Upgradeable Software
OPTIMOD-FM's software can be upgraded by running Orban-supplied downloadable upgrade software on a PC. The upgrade can occur remotely through the 5518's Ethernet port or serial port (connected to an external modem) or locally (by connecting a Windows® computer to the 5518's serial port through the supplied null modem cable).

Administrating and Monitoring
The SNMP (Simple Network Management Protocol) features allow you to monitor your Optimod’s status and to send Alarm notifications via your Optimod’s Ethernet connection to your network.
API: This interface can be used to allow custom third-party applications (including auto- mation systems) to recall presets, view status and set the controls.

Certified
The 5518 is designed and certified to meet all applicable international safety and emissions standards.