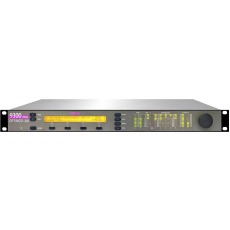 Orban's all-digital 9300 OPTIMOD-AM Audio Processor can help you achieve the highest possible audio quality in monophonic AM shortwave, medium wave and long wave broadcasts. OPTIMOD-AM delivers louder, cleaner, brighter, FM-like audio with an open, fatigue-free quality that attracts listeners and holds them. Because all processing is performed by high-speed mathematical calculations within Motorola DSP56367 digital signal processing chips, the processing has cleanliness, quality, and stability over time and temperature that is unmatched by analogue processors.

OPTIMOD-AM 9300 is descended from the industry-standard 9100 and 9200 OPTIMOD-AM audio processors. Thousands of these processors are on the air all over the world. They have proven that the “OPTIMOD sound” attracts and keeps an audience even in the most competitive commercial environment.

The 9300 was designed to deliver a high-quality FM-like sound to the listener's ear by pre-processing for the limitations of the average car or table radio (while avoiding audible side effects and compromises in loudness or coverage). Except for newly designed parametric lowpass filters, the 9300’s five-band compressor and clipper are identical to those in the 9200. Additionally, we have improved on the 9200 by adding a more powerful equalizer and providing a two-band AGC with window gating.

Like its predecessors going back to the original Optimod-AM 9000, the 9300’s design was based on a rigorous study of real-world AM radios so that the processed audio sounds loud, crisp, and highly intelligible through such radios. Twelve factory presets offer processing appropriate for any format, from fine arts to shortwave speech-only programming. These presets can be easily customized with a one-knob LESS-MORE control. For power users and audio processing experts, all factory programming parameters have been exposed for adjustment via the 9300’s PC Remote application, which runs on Windows®.

The 9300s AGC uses the same dual-band, window-gated technology as the AGCs in many other current Optimods. This technology allows the AGC to correct large level disparities quickly while not adding density to program material levels are already well controlled.

The 9300 is a monophonic processor. If you need stereo processing and/or digital radio/netcast processing, Orban’s state-of-the-art OPTIMOD-AM 9400 is the ideal processor for you. However, not every station needs the power and versatility of our flagship 9400. The 9300 is aimed toward medium and small-market broadcasters who do not intend to broadcast digitally and who are not running AM stereo. The 9300 offers more features and even better sound than previous Orban AM processors, while being easy to install and operate.

Because Orban expects that its 9300 customers will include smaller stations with limited engineering resources, the 9300 has been designed with less than 5 milliseconds of delay, making it comfortable for talent to monitor off-air using headphones—no separate headphone feed is required. To achieve this low delay, the 9300 uses 9200-style multiband distortion-canceled clipping instead of the look-ahead “intelligent” distortion control used in the 9400.

Making the Most of the AM Channel

Rides Gain
The 9300 rides gain over an adjustable range of up to 25dB, compressing dynamic range and compensating for operator gain-riding errors and for gain inconsistencies in automated systems.

Compensates for the High and Low-Frequency Rolloffs
The 9300 compensates for the high- and low-frequency rolloffs of typical AM receivers with a fully adjustable program equalizer providing up to 20dB of high-frequency boost (at 5 kHz) without producing the side effects encountered in conventional processors. This equalizer can thus produce extreme pre emphasis that is appropriate for very narrow-band radios. The 9300's fully parametric low- and mid-frequency equalizers allow you to tailor your air sound to your precise requirements and desires. The 9300 also fully supports the NRSC standard pre emphasis curve.

Wide Variety of Factory Presets
The 9300 comes with a wide variety of factory presets to accommodate almost any user requirement. A single LESS-MORE control easily modifies any factory preset. The user (via FULL MODIFY) can further customize the presets, and these can be stored and recalled on command. Advanced Control (accessible from the PC Remote application) facilitates detailed sound design using the same controls that were available to the factory programmers.

LCD and Full-Time LED Meters
An LCD and full-time LED meters make setup, adjustment and programming of the 9300 easy — you can always see the metering while you’re adjusting the processor. Navigation is by dedicated buttons, soft buttons (whose functions are context-sensitive), and a large rotary knob. The LEDs show all metering functions of the processing structure (Two-Band or Five-Band) in use.

Real-Time Clock
The 9300 contains a versatile real-time clock, which allows automation of various events (including recalling presets) at pre-programmed times.

Test and Alignment
A Bypass Test Mode can be invoked locally, by remote control (from either the 9300’s GPI port or the 9300 PC Remote application), or by automation to permit broadcast system test and alignment or “proof of performance” tests.

Upgradeable
The 9300's software can be upgraded by running Orban-supplied downloadable upgrade software on a PC. The upgrade can occur remotely through the 9300’s Ethernet port or serial port (connected to an external modem), or locally (by connecting a Windows® computer to the 9300’s serial port through a null modem cable).

PC Remote Software
9300 PC Remote software runs under Windows XP and higher. It communicates with a given 9300 via TCP/IP over modem, direct serial, and Ethernet connections. You can configure PC Remote to switch between many 9300s via a convenient organizer that supports giving any 9300 an alias and grouping multiple 9300s into folders. Clicking a 9300’s icon causes PC Remote to connect to that 9300 through an Ethernet network, or initiates a Windows Dial-Up or Direct Cable Connection if appropriate. The PC Remote software allows the user to access all 9300 features (including advanced controls not available from the 9300’s front panel), and allows the user to archive and restore presets, automation lists, and system setups (containing I/O levels, digital word lengths, GPI functional assignments, etc.).

Transmitter Bandwidth as Necessary to Meet Government Regulations
OPTIMOD-AM controls the transmitter bandwidth as necessary to meet government regulations, regardless of program material or equalization. OPTIMOD-AM's high-frequency bandwidth can be switched instantly in 500Hz increments between 4.5 kHz and 9.5 kHz. The lower cutoff frequencies meet the output power spectral density requirements of ITU-R 328-5 without further low-pass filtering at the transmitter, while the 9.5 kHz filter meets the requirements of the NRSC-1 standard (North America). The 5.0 kHz filter makes the analogue AM bandwidth compatible with HD-AM transmission. The lowpass filters have parametric cutoff shapes, allowing you to trade off filter ringing against frequency response flatness.

Two Mono Analogue Outputs and AES3 Digital Inputs and Outputs
The 9300 includes analogue and AES3 digital inputs and outputs. Both the digital input and the two digital outputs are equipped with sample-rate converters and can operate at 32 kHz, 44.1 kHz, 48, 88.2, and 96 kHz sample rates. The preemphasis status and output levels are separately adjustable for the analogue and digital outputs.

Rigorously RFI-Suppressed
All input, output, and power connections are rigorously RFI-suppressed to Orban’s traditional exacting standards, ensuring trouble-free installation. The 9300 is designed and certified to meet all applicable international safety and emissions standards.